Avoid an operation on trigger finger by taking C60

Dr Steve Moore, the Chief Scientist at C60inoliveoil.com interviews Carol who has been suffering from trigger finger for around a year.

We hear from Carol about how her trigger finger had resolved after taking C60 and how, when she stopped, it had returned and so she intends to keep taking it rather than the prospect of an operation or steroid injections.

What is trigger finger?

Due to a number of reason the tendon may become swollen and inflamed so that the tendon stops sliding smoothly and gets stuck in the tendon sheath. When this happens the finger or thumb stays bent and cannot easily straighten out.

Sometimes a swollen nodule can be felt in the tendon, which may also be tender.

When the finger 'triggers' it has to be forcibly straightened out which may produce a painful sensation as the swollen tender suddenly moves passed the constriction. 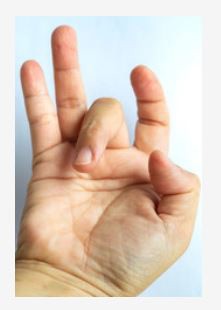 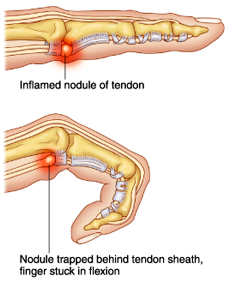 Carol hadn't experienced any issues with her hands until she started to notice that the middle fingers on both her hands were remaining in the clenched state even after she opened up her hands.

During everyday life she would experience trigger finger quite often and was surprised how often she clenched her fists during a normal day.

She says she would even wake up at night and find her fingers had "locked". She would sometimes have to pull them straight and that was a very unpleasant feeling.

She says she is aware there are a number of treatments, which include steroid injections and surgery but she is not keen on either of these.

Carol decided to try C60 as she had heard people having great experiences using it. She says she started out on a "loading up" dose of 20ml of C60 oil reducing to 5ml per day.

She says she had expected an effect soon after starting C60 but rather than giving up she persevered and after a couple of weeks started to find her trigger finger was getting better.

She went on holiday and forgot to take the C60 with her and about a week in to the holiday she found her trigger finger returning. Once she got home she started taking the C60 straight away and within a few days the trigger finger had resolved. As a result she won't be without her C60 again and takes it with her whenever she goes on holiday.

She says she found the olive and black seed oils were too peppery for her. The peppery taste is due to polyphenols in the oil and can be an acquired taste. She was not especially keen on either the pumpkin or hemp seed oils and describes the hemp oil as tasting earthy and grassy. She says she liked avocado oil better, finding it creamier and smoother. Coconut was her favourite and found it had a milky taste.

Carol's experience is the first time we have heard of anyone finding that C60 helped with trigger finger but we presume this is another example of its anti-inflammatory effect.

Do you have a similar problem that C60 can help with?