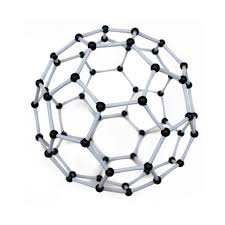 Structure of the carbon 60 molecule

C60 or carbon C60 is a newly discovered form of carbon that research has shown, when dissolved in olive oil and given to rats, almost doubled their life span. Unsurprisingly, this was picked up by sections of the health and fitness community who began taking it themselves.

Since 2012 millions of doses of C60 have been taken by hundreds of thousands of people and many of their stories have been little short of miraculous.

C 60 is a powerful antioxidant, probably the most powerful, thought to be 172 times more potent than vitamin C. Antioxidants neutralise free radicals that, if allowed to build up in the body, lead to inflammation and can cause a range of serious conditions.

Unlike almost all antioxidants C60 is not inactivated once it has neutralised a free radical and can reset itself allowing it act against them again and again. So much so that it has been given the name 'free radical sponge'

Here are just some of the inflammatory conditions that our customers, at C60inOliveOil.com, have reported improvements in after taking C60.

Why not try C60 yourself!

Raj, a mechanical engineer in his mid 30's, developed wide spread psoriasis about a year before these pictures were taken. He was given a variety of conventional treatments with no success. His condition was extremely itchy and the appearance embarrassed and depressed him.​

Fortunately he heard about C60 and decided to try it. We advised him on the 'loading up' dose regime and within 4 weeks of starting you can see the effects for yourself. In addition to his hands being affected, he had a psoriatic rash on his legs and arms. He reports that after starting on C60 in olive oil he has seen around a 70% recovery.

What is C60 fullerene?

C60 belongs to a group of carbon molecules called fullerenes, the more common ones include; C70, C72, C76, C84 with some having 100's of carbon atoms. These ball-shaped molecules were named after the structures designed by the American architect Buckminster Fuller, so in addition to being called carbon fullerenes they are referred to as 'buckyballs'.

Once C60 could be produced in large quantities, its size, physical and chemical properties meant it was used in many industrial applications from car tyres to semiconductors.

As C60's general use became more common, the European Union commissioned a toxicology study on C60 to make sure it was safe to use. It was during this study at Paris University by Baati et al, that the remarkable health properties of carbon C60 were identified.

The study also showed the C60 protected the rats from high doses of radiation and exposure to certain chemicals.

Here at C60inOliveOil.com many of our customers look to share their experiences of taking C60 if it encourages others, who are suffering, to try it themselves.

Debbie and Matt had suffered with psoriasis and arthritis respectively, and after taking C60 both witnessed improvements in their conditions they could once only have dreamt of.

Matt who has had rheumatoid arthritis since in his 20's

"It comes back to that recovery thing, C60 for me, the best the biggest benefit I've got is a better recovery from any physical activity. So the following morning I feel better, stronger, quicker than I would otherwise."

If you have any questions then contact us, we're here to help